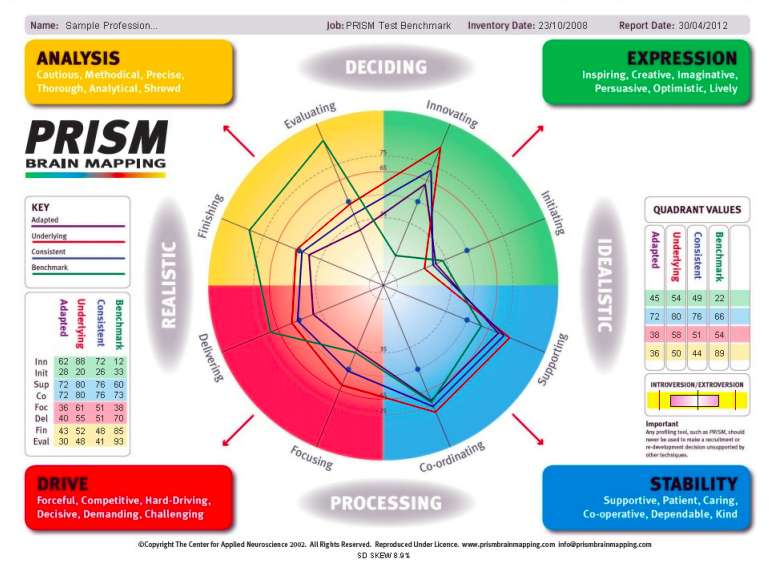 PRISM Brain Mapping is a sophisticated, online, neuroscience-based instrument specifically designed to identify the behavioural preferences that directly relate to personal relationships and work performance. PRISM provides three distinct profiles, or ‘maps’, of a person’s behaviour: how he or she naturally prefers to behave; the extent to which he or she feels it necessary to modify that behaviour on occasions to achieve key objectives, and the overall pattern of behaviour that he or she tends to use for most of the time.

In addition to the eight behaviour dimension maps, PRISM generates up to a 60-page personalised report which measures 26 key aspects of work preference. PRISM also provides an analysis of a person’ s Emotional Intelligence (EQ) preferences and a summary of his or her ‘big five’ personality traits, one of the most widely accepted and used models of personality.

In addition to profiling individuals, PRISM can also produce job requirement benchmarks against which candidates can be assessed in terms of behavioural suitability. It also has the ability to be used as a 360-degree feedback tool to include generic or in-house competencies. It can create team maps and match a team with a team benchmark. It also has a team strengths measurement facility which measures a team’s performance as well as the quality of inter-personal relationships within the team.

Please contact us to discuss relevance and value in applying this tool to coaching and/or training.

CONTACT US
“I would like to express my thanks and gratitude to you in particularly, but also to your support team at enHansen Performance, for bringing PRISM and Neuroleadership to my department. The next 12 months will bring significant change to my department – the type of change that I am sure other organisations are going through. Having participated in your PRISM workshops over the last 6 – 8 months, I feel significantly better equipped to lead through this change.  I have learned so many personal insights into my leadership capabilities which, as you know, have been put to good effect.  I have also seen significant leadership growth in my peers who see every day putting the learnings and tools of PRISM to great effect!

In particular, I have seen immediate measures of success by using the coaching tool, GROW WISE – this stuff works!

Eddie Haddad
Manager, Infringements Court
Department of Justice and Regulation
“From October 2016 until May 2017, the senior managers of a business unit in the Department of Justice & Regulation, Victoria participated in the PRISM and Neuroleadership workshops with Enhansen Performance. The workshops were extremely beneficial in my leadership and management journey of having to lead through change.

The workshops were well structured and the material provided was succinct and logically formatted. This provided me with the opportunity to refocus and realign my thought processes and my leadership style towards the concepts of the neuroscience, in what it takes to be a good and effective leader. The investment has been invaluable to my on-going improvement and development.

I am forever grateful in Kristen’s patience and belief in me during my journey.”

Paul Dimitros
Assistant Director, Asset Confiscation Operations Infringment Management and Enforcement Services
Department of Justice and Regulation
“The PRISM 360 process is the ultimate in depth profiling instrument. This sophisticated neuroscience-based tool and report provided my team and myself with the most comprehensive range of information about our individual behavioural preferences and what competencies were being under utilised or being over compensated. The impact being that this did not allow individuals to perform at their best. The 360 process has not only raised our individual awareness giving each and everyone of us the opportunity to continue to grow and develop but has also allowed us to better understand how as a team (through a facilitated workshop) we can leverage our strengths to get the most of our selves and the people we lead and influence. The output of the PRISM 360 is powerful in how it breaks down information by clearly articulating what motivates and drives an individual as well as what turns them off and puts them in a ‘threat’ state rather than a ‘reward’ state.

I have been amazed and highly impressed in how Kristen works and been able to quickly identify and extract the key ‘road blocks’ stopping myself and my team from going from ‘good to great’ in order to deliver extraordinary performance, increasing our awareness and coaching us so we can fulfill our potential.”

George Roberts
General Manager
Depots & Logistics BP Australia
“EnHansen Performance provided Cairns PDO Transport and Main Roads with over 30 PRISM Brain Mapping assessments during NeuroLeadership workshops for our managers and the Senior Regional Leadership team. She had come recommended after the work done with TMR in Townsville. The workshops provided insight to each of us about how our brains work and this was powerful in understanding ourselves and others. The PRISM reports became a useful development tool for our leaders to work with to create more cohesive and effective teams. They were packed full of useful information from career development to mental toughness, emotional intelligence to strengths and areas to develop. We found them surprisingly accurate and gave us all a universal language for understanding each other. As a management team of predominately engineers it gave some scientific basis to the art of leadership and promoted emotional intelligence in a structured and logical way – playing to the strengths of engineers, whilst still engaging with staff overall.”

Jessica Riddell
Business Development Manager
Queensland Government – Transport and Main Roads
“The PRISM assessment has assisted my Manager and I determine where I work extremely well, my natural comfort zones, how I complement the team and some areas for development. I thoroughly enjoyed the briefing session with Kristen as it provided a deep understanding of the report enhancing further insights. I would highly recommend completing PRISM if you are looking for a deeper understanding of how you and your team perform and how to play to your strengths.”

Tanya Camilleri
Sales Knowledge Manager
South Pacific – BOC Limited
“I found the PRISM experience a great insight into not only my inherent behaviours but also what proportion of these behaviours were evident to a wide range of stakeholders with whom I engage with on a regular basis. The 1:1 sessions with my facilitator, accompanied with the supporting material, allowed me to clearly identify key areas for improvement and articulated key behaviours to either focus on or be weary of to achieve my goals. Whilst I found this process rewarding individually the ability to complete this process as part of a leadership team, through short, sharp and informative sessions, has definitely allowed us to greatly improve our effectiveness in leading a large diverse business.” 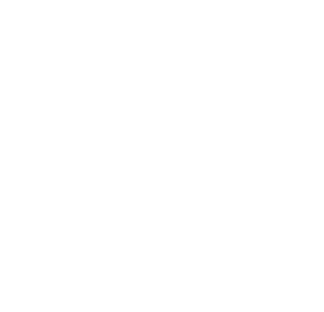 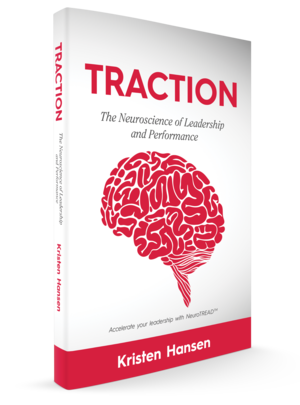 Get your first 2 chapters of the book ‘Traction. The Neuroscience of Leadership and Performance’.